It’s taken a while, but Facebook is now rolling out its promised ‘time spent’ dashboard within its main app, enabling users to track the time they’re active on Facebook each day, and set prompts to limit their use. 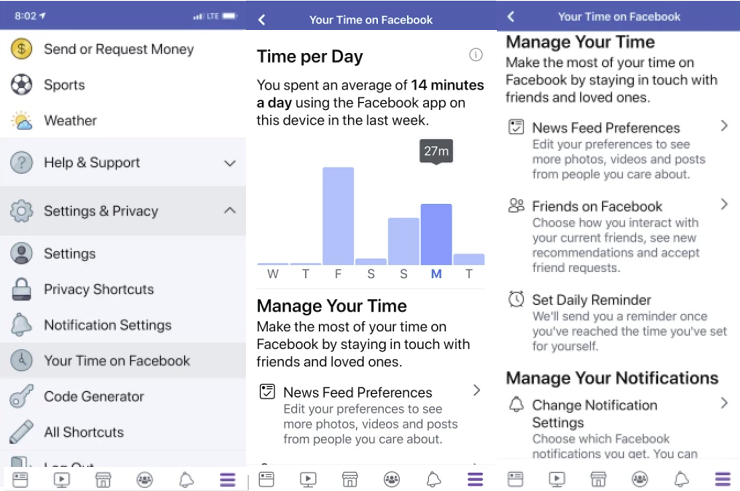 As you can see from the above screenshots, the new dashboard is available within the functions listing, and through it, you can see your total time spent, set daily reminders, and change your settings to make better use of your time.

The options are very similar to what Instagram launched last week, which are part of the broader ‘digital wellbeing’ push within tech circles that’s been initiated in response to a range of reports about the potential negatives of overuse of digital platforms.

Facebook itself commissioned a report which found that passive engagement on social can lead to negative mental health impacts. That finding puts Facebook, as a business, in a tough position – on one hand, it needs to make you come back to the platform and use it as much as possible to boost its usage stats (and attract more ad dollars), but on the other, there are user welfare concerns with the same.

In this respect, Facebook’s new tracking tools seem somewhat like a red flag being waved by a matador – yes, they seek to address the core issue, but not really.

As noted by Techcrunch:

“Facebook and Instagram’s versions are particularly toothless. There are no options to force you to ease off your usage, just a quick daily limit notification to dismiss. iOS 12’s Screen Time at least delivery’s a weekly usage report by default so the feature finds you even if you don’t go looking for it. And Android’s new Digital Wellbeing dashboard is by far the most powerful, graying out app icons and requiring you to dig into your settings to unlock apps once you hit your daily limit.”

Really, the apps themselves are not responsible for how you use your time – if you choose to spend your free hours mindlessly scrolling through Facebook, that’s up to you. The providers can give you access to tools to highlight the potential problems with this, but they can’t necessarily enforce any ‘rules’ around use. It is possible that they could do more, as TechCrunch notes, and Facebook could also provide more insight into how, specifically, you’re spending your time in its apps, which may help to guide your usage. But the tracking dashboards are, looking at the other side of the argument, at least a first step.

So long as people go looking for them. Will you check out your Facebook usage stats?

I’m willing to bet the majority of users of both apps won’t bother – because who wants to know how much time you’ve wasted? Who wants to be shown the hours they could have spent doing something more productive? Hence, the red flag analogy – yes, Facebook is providing tools to help, but really, they’re somewhat meaningless in the broader scheme. You’ll keep on using Facebook and Instagram the same way regardless.

That’s not to denigrate Facebook for making the effort – and who knows, maybe they will prove beneficial, and will limit our time spent, and the negative impacts. But I wouldn’t count on it.

But if you’re keen to know, you can now check your time spent. The option is being rolled out to all users from this week.

If we didn’t answer all of your questions, feel free to drop us a line anytime.